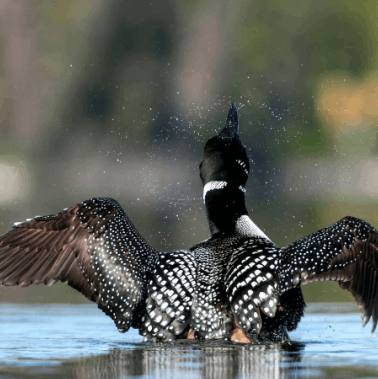 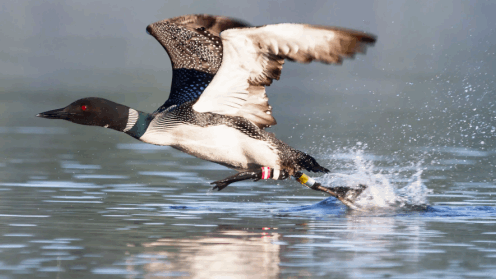 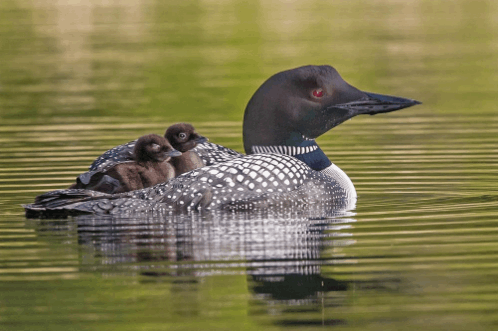 The common loon is large, red-eyed, black and white waterbird found throughout Canada in the breeding season of summer, and along the coasts of North America in the winter. They are highly adept swimmers, with legs set far back on their body and webbed toes, as well as unusual solid bones, which allow for their underwater agility. As adapted to swimming as they are, loons are awkward on land and only come to shore to mate and nest. Even to fly they must rely on water, where they will flap their wings and run across the surface in order to gain enough speed for take-off.

As an aquatic bird, the loon mostly feeds on fish, favouring perch, catfish, and minnows. It can dive to depths of 75 meters in pursuit of its prey. Loons also use their diving skills to evade predators, of which they have quite a few. Various birds, fish, and land mammals alike have been known to prey on loons.

Spring and summer are when loons begin nesting on lakesides. Eggs are incubated for about a month by both parents, after which hatchlings leave the nest almost immediately, and are often seen riding on their parents’ backs. Juvenile loons can fly after about 11 weeks, and are left to fend for themselves after about 12. Young loons will flock and migrate together, following their parents south in the winter.

Loons are best known for their distinct vocalizations, the most famous of which is their haunting, wolf-like howl. Mates will use this call to figure out each other’s location. To many, this wail embodies the wilderness and solitude of the Canadian North.


（写真上記）
In the summer, the loon sports a white belly and white patterns across its black back.
（写真上記）
Loons must run on the surface of water to become airborne.
（写真上記）
Loon parents often carry around offspring on their backs.